This video is very descriptive, but people HAVE TO KNOW THE TRUTH about what is going on with Planned Parenthood.

Please contact your representatives, e-mail, fax, call, use social media in every way you can to try to help Neil Gorsuch become our next Supreme Court Justice.  The democrats are fighting him every way possible because he believes in LIFE. We need your action, but we also need your prayers.

Video is one of many that can be found on YouTube posted by www.liveaction.org. 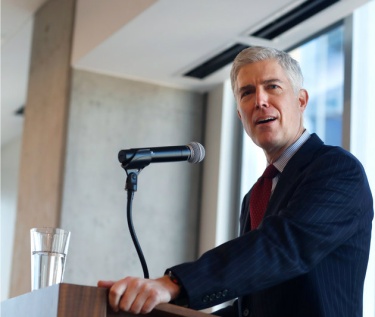 It’s been clear from the beginning of his nomination process that Judge Neil Gorsuch is well-qualified to fill the shoes of Antonin Scalia on the U.S. Supreme Court. The American Bar Association agrees, giving him their highest rating: “well qualified.” The U.S. Senate unanimously approved Gorsuch to the U.S. 10th Circuit Court of Appeals in 2006.

Several groups are opposing his nomination, including abortion supporters like Planned Parenthood. It’s clear their fears have nothing to do with Gorsuch’s judicial experience or his personal views; they fear him because he’s fair-minded.

In his writings and public statements, Gorsuch has made it clear he believes the role of judges is to rule based on what the law says. Simple enough, right? Not for abortion supporters. For years, they have relied on judges to rig the system in their favor.

On November 7, 1972, 60 percent of Michigan voters took to the polls to keep our state’s law respecting the rights of the unborn child. A version of that law has been in effect since 1846, maintained by generations of voters and elected representatives and coexisting for more than a century with the U.S. Constitution.

None of this mattered when Roe v. Wade and Doe v. Bolton were handed down several weeks later on January 22, 1973. Seven judges who personally supported abortion discovered that the Constitution requires abortion-on-demand through all nine months of pregnancy. Unable to directly cite any text in the Constitution to support their personal views, the judges asserted they can be found in the penumbras formed by emanations created by zones.

Those seven judges privileged their own personal views over those of voter and duly elected representatives.

Prolife groups aren’t expecting Gorsuch to impose our agenda through legal magic tricks. All we want is to restore a fair democratic process so our voices have an opportunity to be heard. Based on his record, Gorsuch is a fair-minded judge who lets voters and legislators exercise their proper roles in our government.

The U.S. Senate must consider Judge Gorsuch with all due diligence, but his record indicates those who seek fairness have nothing to fear.

Third Week of Action You Can Take

Next Monday, March 20, is the big day! The Gorsuch hearings will begin in the Senate Judiciary Committee. This week is your opportunity to do two tasks to help people and the press begin to focus on next week’s events:

1. Submit an editorial or letter to the editor to your local paper
2. Encourage your affiliate members to submit letters to the editor

Below are sample letters to the editor you can borrow ideas from, and a reminder of our three talking points. I’ve also attached the editorial we’ll be submitting to the state’s major papers this week, feel free to borrow and steal parts of it as well.

Sample letter to the editor #1:

Our government relies on three co-equal branches of government. Congress writes the laws. The President assents and executes the laws. The Judiciary applies the law to cases and controversies. For too many times in our nation’s history, this has not been how our government operates. Our Supreme Court and lower court judges have often legislated from the bench. They have substituted their personal bias for the will of voters and their elected representatives. This harms our democratic system. Imagine a football game where the outcome depends on which referee is calling the game. Judge Neil Gorsuch, President Trump’s nominee to replace Antonin Scalia on the U.S. Supreme Court, is a judge who will rule based on the law, not his personal feelings. He’s well qualified to serve, and deserves a fair hearing in the U.S. Senate. Let’s leave lawmaking to the voters and their elected lawmakers.

Sample letter to the editor #2:

Judge Neil Gorsuch is a well-qualified judge with a lot of experience. He has degrees from Columbia, Harvard and Oxford. He has served as a U.S. circuit court judge for 10 years. Judge Gorsuch will respect the rule of law and the role of judges in our democratic system. Justice Antonin Scalia, who Gorsuch has been nominated to replace on the U.S. Supreme Court, was also a firm believer that voters and their representatives write laws, and judges should apply laws as they are written. Judge Gorsuch deserves a fair hearing in the U.S. Senate, and should not be filibustered simply because Senate Democrats don’t like him or voters’ decision during the election. Elections have consequences and changes should be in the hands of our voters, not unelected judges. Let judges judge and let voters decide our future.
Talking points: