My state senator is:

senchang@senate.mi.gov
Southgate, Allen Park and Dearborn Heights are represented by Frank Liberati until January 2021.  His contact info is:

This is an important message, please take the time to read it, then act.  Let’s incorporate the power of 10.  When you’re done, send this to ten of your friends that you know will act upon it.

After much hemming and hawing by Republican “leaders”, this past week both the Michigan Senate and House held hearings into the election fraud that occurred at TCF/Cobo Hall.

Why did they finally decide to hold the hearings?  Because enough of you demanded it by calling, emailing or personal conversations.

If you didn’t get a chance to watch them, here are the links

Some highlights from the Senate Hearing

In the House hearing you will hear testimony from many sworn eye witnesses about the many acts of fraud, process irregularities, cheating and intimidation that occured.   There was plenty of it.

In the House hearing here are some highlights:

Each person speaking at the Hearings had signed a sworn statement/affidavit, under threat of perjury, as to what they spoke about.

So what happens now?

Who among us has ANY confidence that the Michigan Legislature will do anything?

We must DEMAND a forensic audit.  A “recount” that merely counts the same fraudulent ballots will not change the corrupt count/outcome.  The ballot boxes must be opened,  the ballots themselves checked for their authenticity, software must be analyzed by experts, and every irregularity examined.  A paper and ink forensic team must also be brought in to verify that the ballots themselves are legitimate.

Everyone is asking:  WHAT CAN BE DONE?

We urge you to call your Michigan Representative and Senator, Democrat or Republican, and demand—— in the name of Election Integrity—-that a complete and independent forensic audit be completed of at least all of Wayne County.

The Legislature HAS the power to order it.

Rudy’s impassioned statement to the House Hearing included this challenge to the Committee:

“You have the courage to say that the certification that was done in your state is a complete phoney.  It’s a false statement made to the U.S. government!  That’s how you end fraud”  -Rudy Giuliani

Time is of the essence.  Please call, text, tweet and email your Representative and Senator right now.

P.S. Beware:  The Secretary of State will say “we always do an audit after every election”.  DO NOT BE FOOLED.  That is a “process audit” to identify areas to improve next time.  It is NOT a forensic audit that will focus on FRAUD.

I have been working with the Susan B Anthony List canvassing in my local community for the last six weeks.  It is VERY rewarding to speak one on one in a non-threatening way with voters.  You are provided with a map, and names and addresses of the people to survey.  And I’m using the extra income to donate to pro-life candidates and causes!

If you’re looking for another way to advance the pro-life cause, this is a short term, part time commitment with valuable returns!  Please consider it or recommend it to someone that you know. 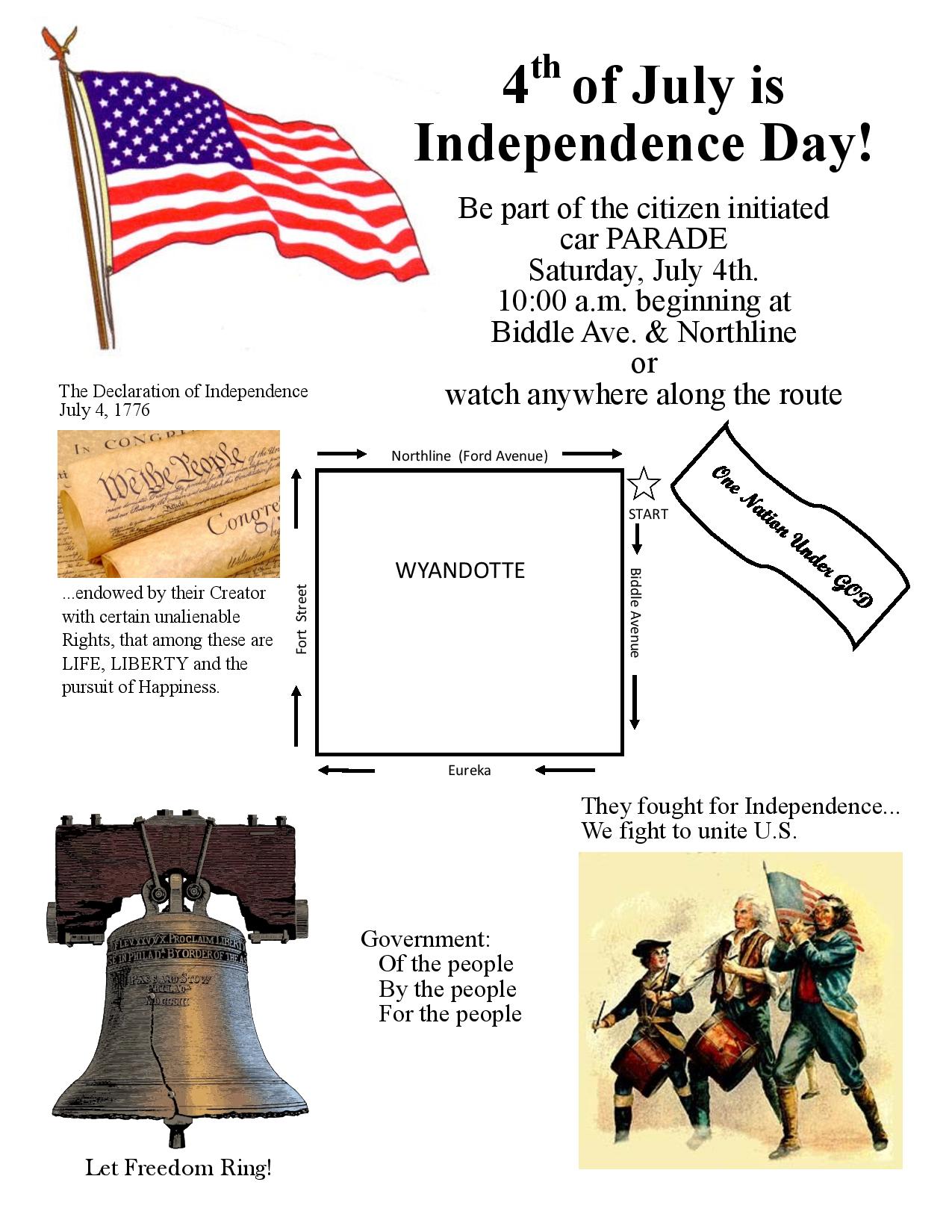 Anna Danyko is treasurer for Upper Downriver Right to Life. She has been hired to promote the pro-life candidates for the election. You can help! See her following message:

It’s Anna, and I’m here to inform you about what’s new and WHAT’S HAPPENING in PRO-LIFE Michigan from now until Election Day in November 2020. I’ve just been hired by the PRO-LIFE ORGANIZATION, Susan B. Anthony List as a Field Director here in Michigan, and I’m hoping you’ll JOIN ME in an effort headed up by the Susan B. Anthony List to influence Michigan voters FOR LIFE this November.

All you need is a heart for the Lord – FOR LIFE – and a cell phone to download our app in order to conduct the simple survey at the homes. As heard on the video, canvassing with SUSAN B. makes a difference–up to 6.5 percentage points! Canvassing age begins at 16 and goes up from there. Walk by yourself, with a partner or a group. You decide. THIS IS YOUR OPPORTUNITY TO HAVE MORE OF AN IMPACT ON THE UPCOMING ELECTION AND EARN MONEY AS YOU DO IT. DON’T PASS IT UP! CONTACT ME TODAY

Also attached below is our hiring flyer. PLEASE POST IT AND FORWARD THIS EMAIL TO ALL THOSE YOU KNOW WHO MAY BE INTERESTED. 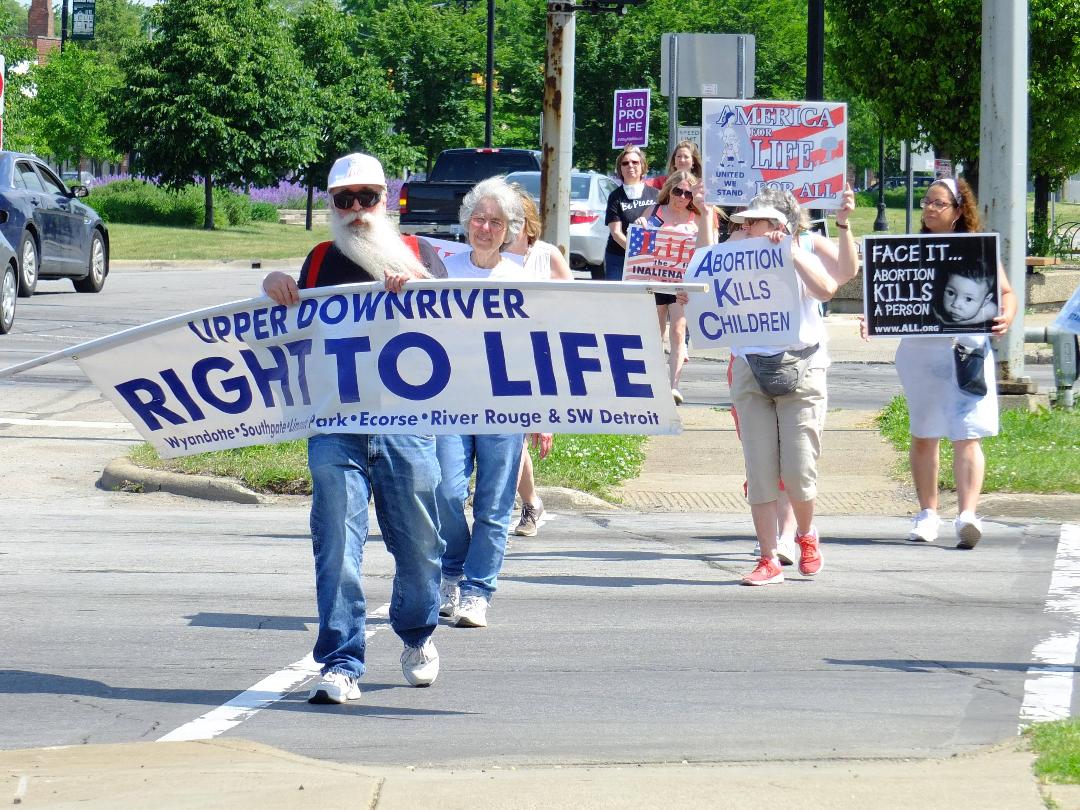 The Life Walk participants represented many more who were unable to join in the two mile walk.  The Christian responsibility to defend life from the moment of conception to natural death was highlighted with the opening prayer by Deacon Richard Bloomfield of Our Lady of the Scapular Catholic Parish in Wyandotte.  The walk began at First Baptist Church of Lincoln Park 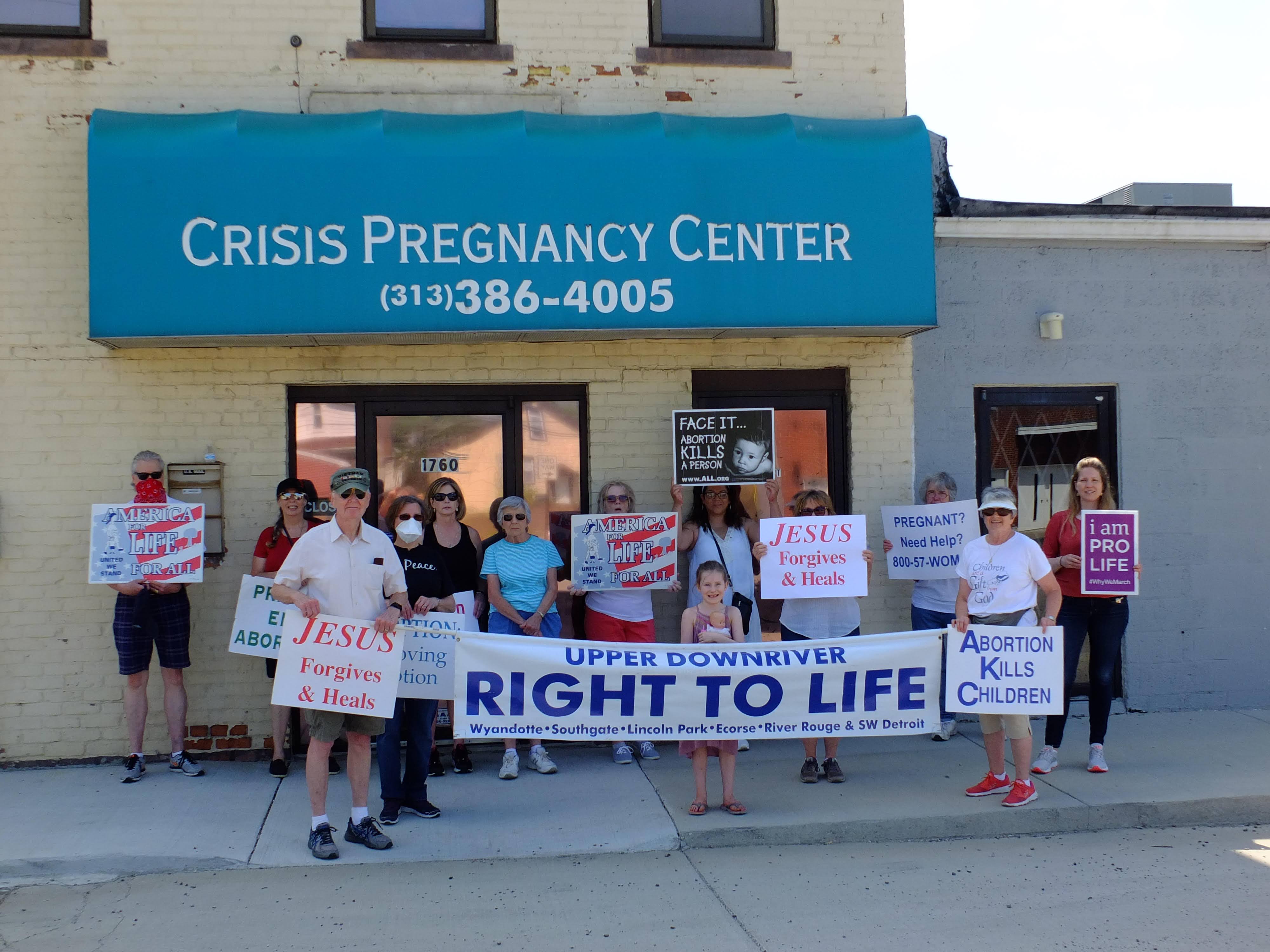 The annual peaceful fund raiser walk increases the awareness of the tragedy of abortion and took place Saturday morning, June 6.

After almost three months of lock down due to the Coronavirus Pandemic, the outdoor walk offered an opportunity to see like-minded friends for the first time in many months.  While other groups carry signs that Black Lives Matter, the Life Walk group signs declared that ALL human lives matter.  It is significant that although Blacks compose 13% of the population, 50% of all abortions in Michigan kill unborn Black babies. (https://rtl.org/wp-content/uploads/2018/12/HopeForTomorrow_brochure.pdf)  Abortion is an injustice for all innocent children in the womb and more so for Black babies.

Life Walk participants included the two dozen walkers, young and old, plus twice as many who supported the effort with their pledges.   The walkers came from throughout the Downriver area.  They carried signs declaring, “America for Life for All,” “Abortion Kills Children,” “Life: the First Inalienable Right,” and “Adoption: the Loving Option.”   While walking the two mile route, Ed Kroll, president of Upper Downriver Right to Life noted that the friendly toots of the horns of passing cars and thumbs up responses were significantly more than in previous years.

Following the Life Walk was a potluck picnic.  During the picnic, four passers by took the time to stop and talk and offered donations, increasing the successful fundraiser.

We hope that you can join us for the annual LIFE WALK.  The details are on the attachment.  If you are not able to join us in person, you can still support Upper Downriver Right to Life in our ongoing work.  You can pledge or mail your donation.  If you would like to help us make phone calls (requesting pledges) to our members who do not have e-mail, please reply to this message.  We especially need to work to re-elect pro-life President Trump and elect John James for senate in November.

If you can only make one phone call, this is it:

This information is forwarded from the Pro-Life Action League:
Dear Pro-life Friends,

I’m reaching out to you today as a pro-life leader to ask for your help with an urgent campaign.

In response to the Coronavirus outbreak, all Americans have been asked to practice “social distancing.” In many states, governors are ordering schools and restaurants to close, and even many churches have closed their doors.

But in the midst of all this, nearly every abortion clinic in the nation remains open for business.


Can you believe that? Millions of Americans can’t go to a church service, but the abortion industry is running at full steam.

We need to put a stop to this.

That’s why I’m asking you to mobilize your pro-life network to call on our governors and demand that they use their emergency powers to close every abortion facility in your state, immediately.

The page provides talking points, along with the contact information for every governor in the country.
Please note that we’re not just asking people to call their own governors, but to call other governors as well, starting with the Republicans that are most likely to respond. This virus is crossing state lines, so we all need every governor to put a stop to elective abortions.
Let’s flood our governors with calls till they do the right thing and shut abortion facilities down for the duration of the Coronavirus outbreak!
Yours for Life,
— Eric
Eric J. Scheidler
Executive Director,
Pro-Life Action League

Raising funds for Pro-Life Education.  The more $ we raise, the more lives we save!

Bring the family or come alone and join this Fundraiser for Upper Downriver Right to Life, affiliate of Right to Life of Michigan (734) 288-8798.

12:00 Noon  Awards and picnic at Memorial Park, adjacent to First Baptist Church:  Pizza, beverages and potluck picnic for all.  JOIN US WHETHER OR NOT YOU WALKED.

FEEL FREE TO PRINT THIS FORM AND JUST SEND IT IN TO US! 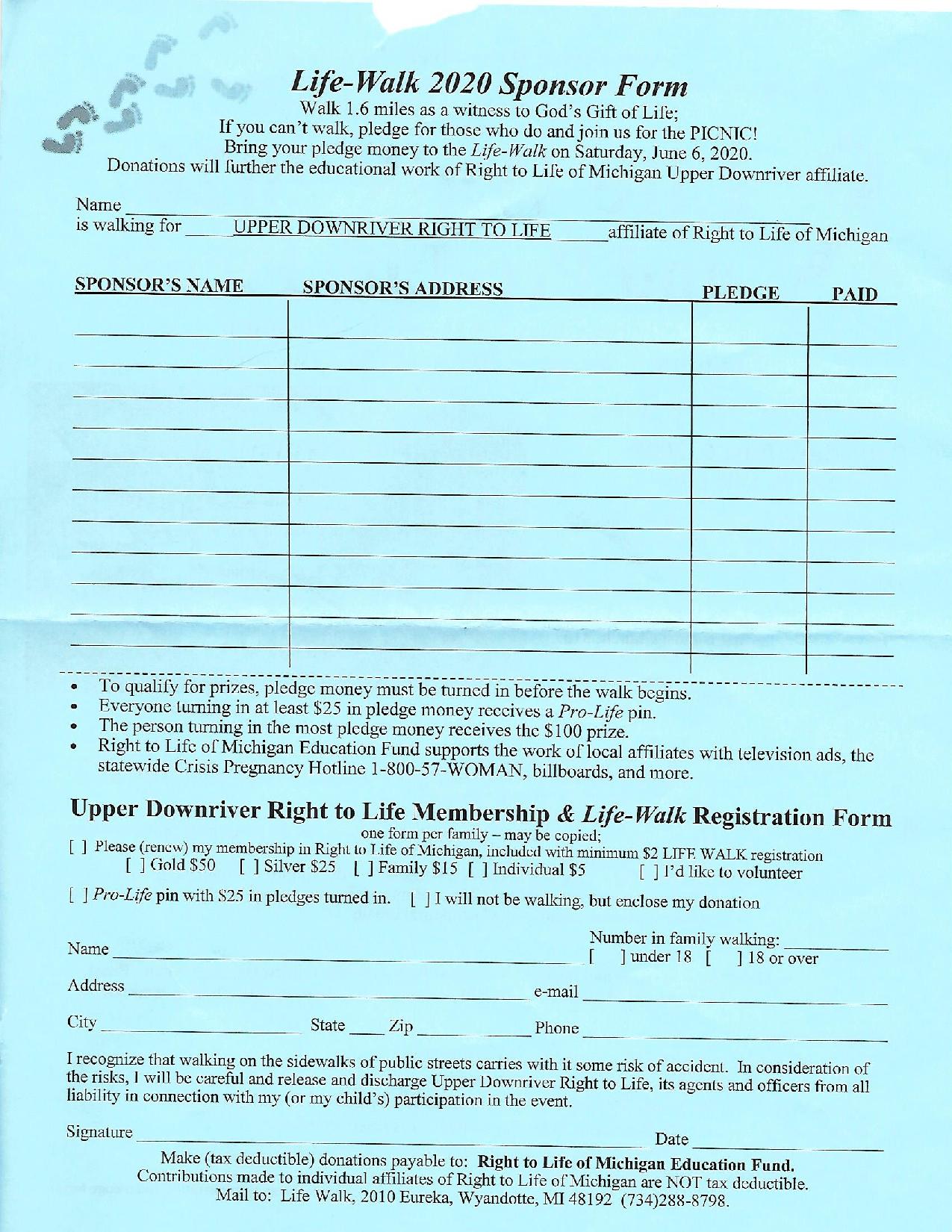