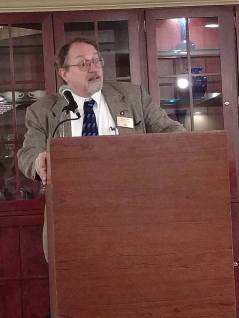 Can a sincere Christian, or any person of integrity, participate in politics? And why do politics seem to turn up even in the office, the church, or the family? These and other questions of immediate concern will be discussed in an evening study of First and Second Samuel at St. John’s Lutheran Church in Taylor beginning Wednesday, July 19, from 7:00 p.m. To 8:30 p.m., and continuing for 12 weeks.

The class is unique and timely as it will be led by a statewide elected official, Dr. Richard Zeile (“Dr. Z”), who serves on the State Board of Education, currently as Co-President. The Old Testament books of Samuel chronicle Israel’s shift from a federation of tribes led by judges to a monarchy under Saul and David. David is the traditional exemplar of God’s man in the fields of war and government, and his conduct offers many suggestions as to how the Believer, the sincere adherent of the Christian faith, ought to approach the complexities of war and politics.

Beginning with a basic analysis of politics as any process dealing with conflicting agendas, Dr. Zeile will explore with the class the differing perspectives that give rise to conflicting agendas, the role of loyalties an individual may owe, the ethics of truth-telling and truth-concealing, the creative power of our words in determining relationships, what we praise and blame, integrity, the relation of the divine and the political, of church and state, ethics of war, violence and force, changing social conditions, institutions, and values. These will be illustrated by examples from ancient and American political history. Participant questions and comments are an important part of this class. Various perspectives will be noted and dealt with respectfully, but the class perspective is that of traditional Christianity which regards David as God’s approved exemplar of a political leader.

Attendance at all sessions will be valuable but not mandatory. Participants may register by calling 313.802.1146, but drop-ins are welcome. No one will be called upon to read or speak without volunteering beforehand. This class will meet at the St. John’s Lutheran Church School building, 13115 Telegraph (corner of Northline Road), Taylor. Enter the Northline-facing double doors. Parking is free and cost of the class is provided by St. John’s Lutheran Church, Taylor, a congregation of the Lutheran Church – Missouri Synod.

Dr. Richard Zeile studied political theory at Valparaiso University, Indiana, earned a master’s degree from the Rackham School of the University of Michigan in education, and a master’s degree in church history from the Harvard Divinity School, before completing studies for Lutheran ordination at Concordia Theological Seminary, Ft. Wayne, Indiana. He earned certification as a Specialist in Educational Administration from Wayne State University, and a doctorate in ministry from Detroit’s Ecumenical Theological Seminary. He is the author of several articles in educational and religious journals, Sunday school curricula for Concordia Publishing House, and a study on Detroit school closings in the 1990’s entitled, When Lutheran Schools Close (Lambert Academic Publishing 2014). Dr. Zeile has served as Headmaster at several Lutheran schools, notably at St. John’s, Taylor (2001-214), and Pastor at St. John’s Lutheran Church, Taylor. He was elected in 2010 to Michigan’s State Board of Education where he was elected by his colleagues as Co-President for the 2017-18 biennium. He has served on the Board of Directors for the National Association of State Boards of Education, and chaired their Study Group on Rural Education (2014). Dr. Zeile has taught adjunct courses at Concordia University Ann Arbor in education and theology.

We are having another art session since many of the mothers were very inspired and happy with the last session. It helped them pray and release some stress and they liked the results.

I know that sometimes it doesn’t get busy, but many times it is, and if we don’t have helpers, we cannot provide a peaceful environment for these mothers.

It is just once a month. Plus you can meet the mothers who chose life for their babies.

There will be food and Refreshments.

The conference will feature Emmy award- winning Keynote speaker Ryan Bomberger from the Radiance Foundation who will speak on The Beauty of Possibility and the Social Injustice of Abortion, as well as his break-out session Adopted and Loved.

Additional break-out sessions affirming student’s personal worth and their unique purpose include:

Vendor Resource Tables Representatives will be on hand to share valuable resources with students.  Auxiliary Bishop Donald Hanchon will cap off the conference with the celebration of Sunday Vigil Mass following Praise and Worship at 4:45. Opportunity for Confession, Adoration, Praise & Worship as well! Following Mass students are welcome to stay for dinner, and a closing DJ dance, ending at 9:30 pm.

Cost: $18 for groups advance/ $20 at the door – includes original conference T-shirt, take away resources, dinner and DJ dancing! $10 Dance Only.

All 8th Grade through college students are welcome to attend!  Bring a friend, make some friends, have a great time, and hope to see you there!

Looking for a Christmas or other gift for a young Cath0lic child – then look no further because the Bernadette Book Series of three books is perfect.

Emily Ortega earned a Bachelor of Science in chemistry from Case Western Reserve University. After working for two years as a campus missionary with FOCUS, the Fellowship of Catholic University Students, Emily earned her Master’s degree in Humanities from Stanford University. She currently resides with her husband and their seven children in Sedona, Arizona. She’s excited to bring a fictional Catholic family to life and offer young Catholic readers the possibility that their lives in a big, Catholic family aren’t really that odd.

Bernadette doesn’t know what to do when the principal, Sister Teresa Jerome, announces that her school will celebrate All Saints’ Day with saint costumes. That means no Halloween costumes and no princess dress for Bernadette! Everyone else is excited about finding a great saint costume. But Bernadette doesn’t want to think about it. And to make things worse, her two younger brothers seem to be determined to make trouble for her at home! But with the help of her family, she’s hoping to find the best saint for the first annual All Saints’ Day parade! 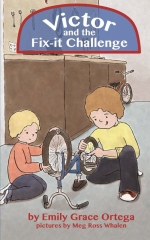 Victor, a fourth grader at St. Cletus Academy. He is not excited about Lent. To make things worse, using his tools continually lands him in trouble. Even when he’s trying to be helpful! With some help and understanding from Mom and Dad as well as his teacher, can Victor learn how to be helpful with his tools by Easter?

This book features the same characters as Ortega’s popular “Bernadette” series. This time, however, Bernadette’s brother Victor is the main character.

Join us and our Guest speaker, Raymond de Souza, Wednesday, Nov. 16 at the Coffee and Catholic Conversation at 10:00 a.m. in the Parish Library of Our Lady of the Scapular (10th and Superior, Wyandotte)

Raymond de Souza, KM is Brazilian by birth, Catholic by grace and American by choice. He is the Delegate for International Missions for Human Life International and regularly travels all over the world to represent HLI in our mission activities as we refute the Culture of Death and proclaim the Gospel of Life.

Raymond has distinguished himself as an international Catholic Pro-Life activist, apologist, author and broadcaster.

He will be attending the Call to Holiness Dinner November 15. (Tickets are still available cthdinner2016.eventbrite.com or call Debbie Bloomfield, 734-934-2599) We are pleased to welcome him for this informal Coffee and Catholic Conversation.

Be sure to watch the other videos on YouTube (type in “Veritas Project” because this one is just the tip of the iceberg, and the other ones get into voting fraud and other matters.  All Christians, Catholics, Jews, Evangelicals, and Hispanics NEED TO KNOW THE TRUTH.

Don’t let Hillary Clinton and her minions destroy this country and get rid of our religious freedom, our right to life, and all of the rights found in the Bill of Rights and our Constitution.

To pay by credit card, register online at:  CTHdinner2016.eventbrite.com

Fresh from announcing a list of pro-life leaders who are advising him on issues that matter to pro-life voters, Donald Trump has named a group of pro-life Catho

They claim his voting record contradicts the Catholic faith, particularly on issues of abortion and gay marriage.

“He supports death, and therefore he should not get votes,” demonstrator Jacqueline Hawkins said.

“You are a CINO, you are a Catholic in name only,” organizer Frances Bouton said.

Kaine has attended St. Elizabeth’s Catholic Church in Richmond for about 30 years.

But now the Jesuit-educated, former missionary is in hot water with some fellow Catholics.

“He is not America’s dad at all. If people just scratched the surface … he’s really, all I can say, is evil,” Bouton said.

Bouton says Kaine is not in good standing to accept Holy Communion.

Years ago, Kaine supported more restrictions on abortion and said he personally opposed it. But now he has a 100 percent voting record on Planned Parenthood’s 2016 congressional scorecard.

While NBC29 stayed outside the church, the director of communications for the Catholic Diocese of Richmond came over and requested we not disturb parishioners leaving the service.

Deborah Cox also said the Rev. James Arsenault of St. Elizabeth’s would not be available to speak with us.

But, last month, Arsenault appeared on NPR for an interview.

“He really extends a hand to help people and is very compassionate, approachable, available and friendly,” Arsenault said about Kaine.

At times, Kaine has also faced criticism for being personally opposed to the death penalty, while allowing executions to be carried out as governor. On that issue, Arsenault said, “The church has a teaching with regard to we’re pro-life, and we believe in that seamless garment of life. We respect sometimes lawmakers make difficult decisions.”

Parishioners coming out of church Sunday said they love Kaine, but they were not willing to go on camera. Someone inside church said toward the end of Mass, parishioners were encouraged not to speak with the media. Kaine was not at Sunday’s Mass.

To see news broadcast, click on the “Source” link below.