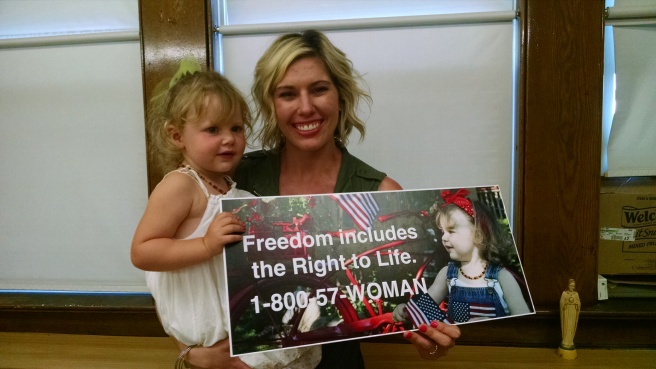 Each year UD-RTL holds a fund raising and awareness raising Life Walk with most walkers bringing donations from sponsors and pledges from some who are not able to join us as we walk with our signs along a major roadway.  The event is followed by a potluck and pizza picnic.  In 2016 we raised about $1500.
The Board of Directors and interested members suggested that we should use the money to purchase billboard space in strategic areas of Detroit’s Downriver area.  After research, we found out that for $1500 we could get two billboards for four weeks in July when there would be a lot of traffic coming to the Fourth of July Parade and annual four day Street Art Fair in Wyandotte.
At the February meeting the possibilities were being discussed when a visitor suggested that a billboard design contest be held for youth ages 13-24.  It would serve as a means to get the art work, but more importantly would engage the youth in the pro-life concept and give them cause to consider the consequences and alternatives to abortion.  They will be the ones who might hear of a young woman who is pregnant and considering abortion.  They can offer the help available from Right to Life of Michigan’s 800-57-WOMAN help line.
So Alicia Kwalton, a busy mother of 11 children offered to organize the contest, contact local high schools, and raise $1000 so that two prizes of $500 could be awarded to two winners.  She did all of that!  The contest information was publicized in our local newsletter, churches, and the Downriver News Herald newspaper.  She even contacted and was interviewed by Teresa Tomeo one morning on Ave Maria Catholic Radio.
There were 59 entries, mostly from Gabriel Richard Catholic High School students.  Using a five point judging criteria system, the winners were chosen.
A wide-eyed baby and the caption “Don’t let lives end before they begin.” and 1-800-57-WOMAN, was designed by Isabella Kandes and Francesca Vitale, from Gabriel Richard Catholic High School was chosen as a winner.  The other winner was Mackenzie Fortener, 23 years old and from Our Lady of the Scapular parish in Wyandotte who used a patriotic theme and her photograph of her niece with the caption “Freedom includes the freedom to live.”

Thank you to the Knights of Columbus Council from St. Pius X Catholic Church, Gabriel Richard High School, and six individuals who donated $1000 of prize money which was  awarded at the June monthly meeting of UD-RTL.  The winning billboards may be seen for four weeks from June 26 to July 23 in Wyandotte on Northline Road at the railroad tracks and in Southgate on Eureka a few blocks west of Fort Street.