Wayne County Right to Life affiliates sponsor the annual Oratory Contest for high school students.  This event involves researching, writing and presenting a speech on abortion, euthanasia, infanticide, stem cell research or cloning. The contest provides the building of their confidence in public speaking, critical thinking and constructing persuasive arguments.  They also learn how to engage others in constructive discussions about life and death issues.

The top three winners receive monetary prizes of $125, $75, and $50 respectively, and their choice of a Pro-Life tee shirt, and the first place winner will advance to the state contest in May.  In June, the state winner then competes at the National Right to Life Committee in Kansas, and the winning student also has the opportunity available to give their presentation at other local events.

“Non-white races must be excluded from America … The red and black races if left to themselves revert to a savage or semi-savage stage in a short time.” – Lothrop Stoddard Margaret Sanger, founder of the American Birth Control League (ABCL), which became Planned Parenthood in 1942, had on her ABCL board a number of controversial […] 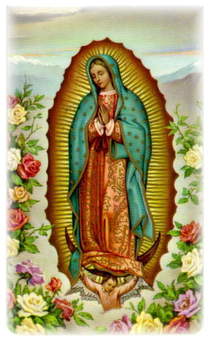 We are always in need for Volunteers to help out with the Guadalupe Workers monthly meeting for families!

The moms are in one room with their activity while the children are in 3 rooms by age; infants, little kids, and the big kids.

We can never have too many volunteers! The best volunteers will take initiative to engage the children one-on-one toward building relationships. Volunteers have something to give, something to gain. We miss out when we stand on the sidelines. So if and when we find ourselves standing in a crowded room of kids, wondering what in the world to do….. let’s introduce ourselves by name and start getting to know someone of these wonderful children. Spend time. We are family! Give voice to other’s gifts, encourage them in their strengths. That’s our main job. THANK YOU SO MUCH FOR VOLUNTEERING. You make a difference!

Down Syndrome affects approximately 6,000 babies at birth each year, and is a disorder that occurs when there is a duplication of the twenty-first (21) chromosome. World Down Syndrome Day was created as an event to raise public awareness,  encourage advocacy, promote inclusivity, and support the wellbeing of those living with Down Syndrome.  The date, March 21 is a date chosen to represent the chromosomal defection found in Down Syndrome (the 21 day of the third month.

The 2018 Gerber baby  is Lucas Warren, the first child with Down syndrome to receive the honor of, essentially, America’s cutest baby.  The 18-month-old from Dalton, Ga., was selected as “2018 Gerber Spokesbaby” from more than 140,000 photos submitted by parents.

The organization will be using the funds to target gubernatorial and Senate races in Arizona, Florida, Michigan, Minnesota, Nevada, Ohio, Pennsylvania and Wisconsin, key states where Planned Parenthood organizers believe they can have the greatest impact. The money will go toward grassroots campaign efforts, as well as TV and digital advertising and mail programs to reach the largest number of voters possible…..”This is only the beginning of our political and electoral strategy that we really believe will protect and defend reproductive health care and Planned Parenthood in the years ahead.”

Help Pro-life candidates by making phone calls, helping in anyway possible in their campaigning, and sending e-mails or letters to the candidates for Governor and Senate.  The House has been doing their part to defund Planned Parenthood, but the SENATE has refused to act upon it despite the frustration from House lawmakers looking to amp up pressure on Senate Majority Leader Mitch McConnell (call, send e-mails and letters to him too).

Make sure to get the word out on your social media sources on where various candidates stand so we can continue to get more pro-life Governors and Senators, who will fight for the sanctity of life. They (Planned Parenthood) are trying to defeat us with money, but that plan didn’t work in 2016 when Clinton out spent President Trump, and it doesn’t have to work in 2018 as long as we become active. Let’s make all the Governors and Senators know that their vote to fund Planned Parenthood will cost them a personal vote on election day!