(AP) “House Minority Leader pictured standing, far right, speaks while colleagues play solitaire Monday night as the House convened to vote on a new budget. The guy sitting in the row in front of these two….he’s on Facebook, and the guy behind Hennessy is checking out the baseball scores. These are the folks that couldn’t get the budget out by Oct. 1,  and are about to control your health care, cap and  trade, and the  list goes on and on.
Should  we buy them larger screen computers – or  – a ticket  home, permanently?
This  is one of their 3-DAY WORK WEEKS that we all pay for (salary is about $179,000 per year).”   We can stop this waste of money and time, but to do so, we have to take the time to voice our opinions via phone calls, e-mails, and letters to our representatives.

How sad Tim Giago (Mario Gonzales is involved) is promoting the Commercialization of Wounded Knee! I wonder if he has consulted the relatives of those buried there first?….and why would he pay 3.8 Million for land owned by a white man smack in the middle of a reservation?…Something wrong here! United Urban Warrior Society will NOT support this!….Assimilation at its best!

“United Urban Warrior Society” doesn’t support this at all and will stand with those who oppose it! and will host a couple rallies this summer at the Wounded Knee Site & Tims news Paper “Native Sun news”

Giago: “I signed an agreement to be the sole purchaser of Wounded Knee. The reason is that it has been sitting there idle and doing nothing for over 40 years.” Then he said: “I said the land would be put into trust for all of the tribes of the Great Sioux Nation.”

There is MAJOR! Questions here about Giago’s true motivation and intent here. If purchase does occur, who is he planning on holding it in trust with? The Federal Government???? When you start looking at this deal it starts to smell. After Wounded Knee ’73 old Gildersleve sold this to Czwyczynski for $ 20,000. Now this brings up 2 questions.

1) How the heck did Gildersleve ever get a clear title to those 40 acres anyway? According to the 1868 treaty a white man cannot own land within the boundaries of the reservation! unless he is married to a Native who is an enrolled member, but when she dies it goes to her family NOT the white guy! The Gildersleve illegally sold this land and the Oglala Sioux Tribe should fight this and retain the land! From what I have been told the BIA made this mistake and hasn’t got the balls to fight it! Or being paid off to look the other way!

2). Why is Giago willing to pay $ 3,900,000? That’s MILLION dollars for something that sold for $20,000. In the 1970’s? Trust me; he’s greasing his and Mario’s palm somehow on this deal. Mario Gonzales is involved here we know its about money and this alone draws many red flags!

What about the other land owners around this site? What is their input? From what I have been told they are not happy about this deal either.

I have been told that Tim Giago has never done anything for the Memorial at Wounded Knee. Back in 1973 he supported Dick Wilson’s regime. Dick & his goons used Tim’s paper “Lakota Times” to trash & condemn AIM & murder our people at that time. So, Mr. Giago has blood on his hands. It is well known that Tim Giago has attacked and wrote stories against the American Indian Movement “Blaming them for firebombing his news paper‘s office in Pine Ridge”. He has also spoken against Leonard Peltier, slamming those who would support him.

Giago says: he has already created a 501(c)(3) non-profit organization called the National Historic Site of Wounded Knee Inc. There is a Wounded Knee Memorial already there at the site! But because it is associated to The American Indian Movement he will not support it nor recognize it.(Own by the Fire Lighting Tiospaye!)

Giago: My attorney is Mario Gonzalez, who is Oglala Lakota, and he will be putting together the trust for all the tribes. Scared of this! Mario has been removed from the Treaty Council and has been involved in several scams to get money from the Black Hills!

Giago has also talked with former U.S. Senator Tom Daschle in Washington DC and several friends in New York City to begin fundraising efforts in Washington DC and New York. (This boils my blood! Why would we ask the same Government who massacred our people in cold blood and still honor 18-medals of honor to the soldiers who killed innocent woman and children at this site!)

Giago: Can you imagine a really beautiful Holocaust Museum and a big trade pavilion for Indian artisans and craftspeople? They could set up booths year-round and sell their arts and crafts to the tourists. We would have tourists come from all over the world and stay in Rapid City go to the restaurants and hotels, Take buses to Wounded Knee, It would create over 200 jobs For the people down there. It would be also a boost financially to Rapid City, South Dakota,” he says.

Are you kidding me? Here is the true motive right here! He said it in his own words! Why would we want to boost Rapid City and not Pine Ridge?

A little side note here folks! In all this talk there has been NO mention of those Murdered here! Those Ancestors buried there are not all Ogalala’s they are Miniconju’s and Hunkpapa’s From Cheyenne River Sioux Tribe and Standing Rock Sioux Tribe. Have their relatives been asked about this? And are they involved? They must have a say in this matter!

This land should be returned back to the tribe and the land must! If sold be sold at a fair market value…and ANYONE wanting to build a memorial on this sacred ground must have the approval of the families of those buried there and an agreement with landowners nearby! As well as an agreement to include or support the Wounded Knee Take over in 1973! Without predigests!

When I first posted that we would not support this I recieved this response from Time Giago!

“Hi James. I am sorry you are so angry that I have set out to buy the lands around Wounded Knee. I think this is a time we should all pull together. My feelings about AIM and Leonard Peltier should have nothing to do with what we are trying to accomplish. There is no one who has worked harder to save the Black Hills than Mario Gonzalez. He litigated for the Black Hills in 1980 before the Supreme Court and the Hills would have been assumed purchased if he had not represented several tribes in litigating this action. The preservation of the Wounded Knee site is of historic importance and as I said the land would be put into trust for all of the tribes of the Great Sioux Nation. What is wrong with that? I need your help and not your anger. Tim”

In closing Mario Gonzalez did not! Litigate for the Black Hills in 1980 before the Supreme Court! It was the Black Hills Sioux Nation Treaty Council who he at the time he worked for and was asked by the elders to do this! They dismissed him because he was scamming moneys and have since been caught a couple times with his hands in the cookie jar!

This is a bad deal! Why would we keep buying our own lands back from the white people at 10 times the value when it still belongs to us as per the 1868 Treaty! Something wrong here people! Think about it! Then to turn around and ask us to chip in when our people and community’s are some of the poorest in the Nation?

Here is the original post! This is where it all started!

This petition will be delivered to:

Downriver Right to Life will again be participating in the Third Friday Monthly Events in downtown Wyandotte.  We need volunteers to work at our booths.  Below is a list of events with their times.  If you are willing to donate a couple of hours (or more) on any of these dates, please feel free to contact us at www.wyandotterlm@gmail.com, or call us at (734) 282-6100.  Locations are not given to us until a few days before the actual event, but we will be happy to call you back if you leave us your name and phone number.

July 12 – July 15 – We will also be having our annual booth at the Wyandotte Street Street/Art Fair, and would welcome any volunteers to help us with this event too.  For more information, please call Chris at (734) 282-6100. 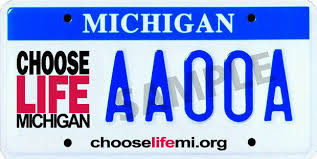 The Michigan Senate completed action on the Choose Life fundraising license plate bill on June 6 and it will reach Gov. Snyder’s desk in the next several days. Because the governor has expressed his reluctance to support this legislation, we are asking everyone to pray and to call the governor’s office.

“Governor Snyder we are praying for you and ask for your support of the women and children who will be helped by the Choose Life license plate.”

That’s the whole message, short and simple. Give your name and where you are from. Don’t attempt to persuade or argue with the staff answering the phone about the merits of the bill. What we do, which is to be prayerful and respectful and brief, will matter much more than the words we say.

If you are as tired as I am about the left trying to rid the voices of conservatives, now is your chance to do something about it.  Join and follow the link below.

It is time for conservatives to fight fire with fire, to make our voices heard and now we have a leader – Media Equalizer.  The left has been doing everything possible to boycott and scare the advertisers into firing anyone on FOX or any conservative programming.  They do not want our voices heard.  If you need more proof, just look at what is happening at universities whenever a conservative tries to give a speech.

The left who spews “Freedom of Speech”, only means speech if you agree with them.

Follow and share the articles from Media Equalizer.  They will be naming and giving info on how to contact the advertisers of the left hate groups.  This is your time to take action!